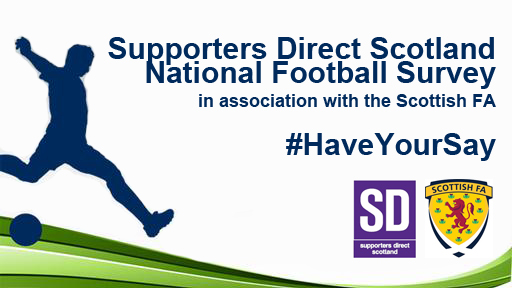 The Supporters Direct Scotland National Football Survey, in association with the Scottish FA, is the second national football survey carried out, the first being conducted twelve months ago by the Scottish FA.

The survey seeks to bring a greater understanding of supporters’ perceptions of football's role within Scottish society, the match day experience, governance of the game as well as grassroots and youth development, among other topics.

Football fans can access the survey here. The survey launched yesterday and will close on Friday the 25th of April.

Paul Goodwin, Head of Supporters Direct Scotland said "Supporters are critical to the game in Scotland and will be increasingly so in the future. It's essential they are engaged in debates and discussions about the future of the game through surveys on key topics here. They are the lifeblood of the game and any changes to the game should have their best interests in mind".

Stewart Regan, Chief Executive of the Scottish FA, said: “The National Football Survey is essential in canvassing the thoughts of football fans in Scotland, regardless of the level of the game they are involved in. This survey poses a range of questions which we're seeking feedback and their views on for the benefit of the game.

“Last year’s survey gave the fans’ perspective on league reconstruction and already you can see the benefits of such areas as the pyramid and play-offs, both of which received the overwhelming support of the game’s fans.”
Remember, we're always looking for your views and opinions on the game's most pressing issues and there's numerous ways you can get involved. Please visit the Fans Parliament page on our website or contact us directly to see how you can get involved and give your views.