The results can now be announced in the election for a SMISA member to serve on the St Mirren board as the fan representative.

There were three candidates in the election. Voting has now closed and the results are as follows: 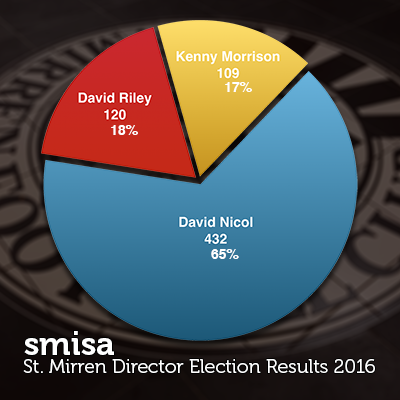 This means David will serve a two-year term as the SMISA representative on the club board, continuing the role he is already performing after being temporarily appointed this summer on conclusion of the #BuyTheBuds campaign.

The SMISA committee would like to thank all three candidates for putting themselves and their ideas forward.

While David is already part of the SMISA committee, both of the other candidates have been attending our meetings in recent weeks, and we would welcome their contributions towards the running of SMISA in the future, as the trust needs people who can help take it forward.

In terms of David Nicol’s role, he is there to be your voice in the boardroom on all important decisions as well as on the day-to-day running of the club.

If there are any issues related to the club you would like to raise with him, he can be contacted on [email protected]. Any queries around general SMISA business should be sent to [email protected]

David will also be the key link between the committee of SMISA and the club itself, giving him an essential role as we continue to build on the work we have done so far.