As you know we ran a ballot over the past week to decide where the last three months worth of the £2 portions of your membership should be spent.

You can see the full descriptions for each option here. A total of 780 members cast their vote. Our thanks go to everyone who did so. We can now reveal the results below.

The top project in each tier will be funded, meaning SMISA will now cover the cost of extra hours for the club’s sports scientist and analyst for the next six months (until the end of January), and buy 11 pieces of new gym and other equipment for the club’s training base at Ralston, for the use of the first team and academy.

We said any leftover cash would stay in the pot for future spends, so an extra £1,863 will roll over to the next vote, and be added to the £2 portions of the August to October subscriptions.

The SMISA committee welcome all ideas from members for club-related projects we could look into over the next few months for possible inclusion in the next ballot (which will be at the start of October). Please send yours to [email protected]

We are sure most of you will by now have spotted the massive black and white members board between the main and family stands, which – as promised during the #BuyTheBuds campaign last summer – contains the names of everyone who signed up by 1 July last year.

Some of the committee got our first chance to see it close up when we had our fortnightly meeting on Monday night, and below is a pic of us, and some posted on Twitter by members. 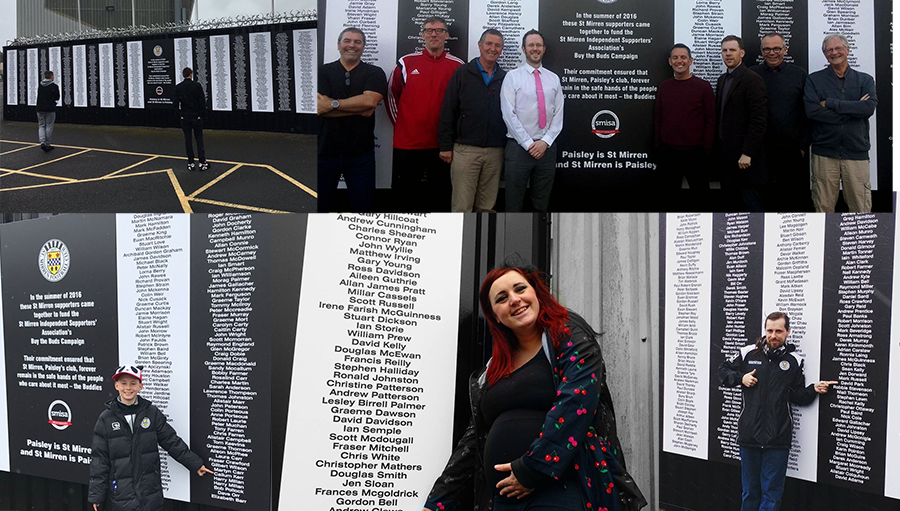 If you are down at the stadium this week or for the Falkirk game on Saturday, please post your pics, on here or on Twitter, and we will keep an eye out for them.

The board took longer than we hoped for to arrange and produce but it seems to be a popular addition so far and hopefully it was worth the wait.

The men to thank are Barry Mitchell of the SMISA committee, who diligently sorted through the names, and member Jack Paterson, who designed and produced the board via his company Saltire Print and Graphics.

Everything SMISA achieved during and since last summer – the new era of the supporters trust and club working closely together, new ways for members to choose how their money can benefit the club, the election of a fan rep to the club board, and the fact we are on the path to majority fan ownership – is only possible because of the backing of one group...YOU. And now you have your name on the wall to prove it!

Over the past two months, a squad of volunteers from the SMISA membership have been hard at work cleaning the stadium in preparation for the new season.

In that time they have cleaned the tops, backs and undersides of the seats in all stands, and swept the stairs in preparation for the painting of the hazard lines.

More recently, the group cleaned the two corner fences beside the family stand, before one was painted ahead of the installation of the SMISA members board. 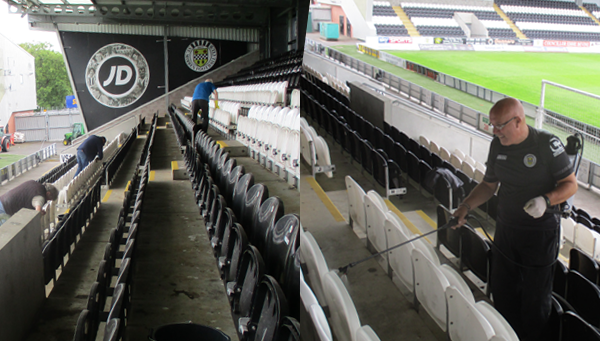 This week the group are turning their attentions to the two corner fences at the away end of the ground, and putting reserved stickers on the backs of seats to welcome new season ticket holders.

The group are led by SMISA’s Jim Crawford, who had been an elected committee member until earlier this year, and still plays a very active role in the trust.

Jim had this to say: “The volunteer team have put in many hours for the stadium to meet our expectations but each and every one of us has done it with pride and passion.

“This is our second home and we are proud to be in a position to use our time to make the St Mirren experience more pleasurable for our supporters. We welcome anyone else who feels they can contribute to the stadium upkeep.”

We are sure all our members would join us in giving a massive thanks to all involved for going above and beyond to create a better match-day experience for their fellow fans.

The volunteer squad usually meet on weekdays – if you could spare a few hours and want to help, get in touch via email to [email protected]

Chance for members to meet committee

At our last AGM we committed to five objectives for the next year – one of which was to create a regular meeting place for members to speak to the committee.

Some of the SMISA board members will be in the Bull Inn in New Street on Saturday before the Falkirk game between 1 and 2.30pm (in one of the booths near the back).

If anyone who wants to pop in to meet us and give your feedback on how you think we're doing, we would be delighted to hear from you.

We will also be handing out leaflets and engaging with fellow fans. So if you have anything you would like to discuss with us, just pop in.

We will be available in other meeting places in future. If you can’t make it along on Saturday but want to get in touch, we can be contacted via [email protected]isa.net

Fingers crossed for the start of the new league season and let’s hope it’s one to remember.