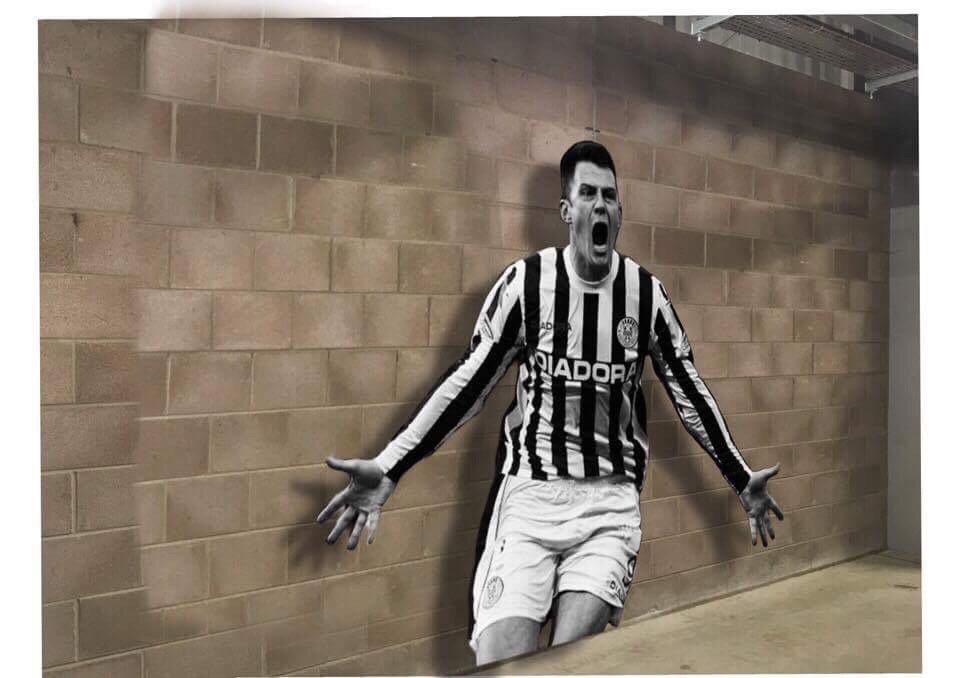 We have emailed our members with details of the projects for the January £2 ballot. See below for details....

There is £3,000 available to spend this quarter and as both projects would take the whole budget, we are asking you to pick one of the below options.

1) Stadium murals - This is a project initially suggested by members in a previous survey which we have looked at on and off over the past couple of years before eventually settling on a format we think works. We are proposing to commission an artist to create six giant murals around the stadium – each commemorating an iconic scene from one of the club’s major trophy wins.

The murals would go on the walls on the inside of the stands (near the toilets and pie stalls) and we hope to have two murals in each of the three home stands (Main, West and Family). Not only would this be a permanent celebration of our greatest moments and bring the club’s history to life for future generations, but it would liven up the stadium’s grey breezeblock interior.

They would be painted by Paisley-based street artist Mark Worst whose eye-catching work round town will already be familiar to many – he painted the mural of the 1987 cup team in Brown’s Lane and the giant kingfisher on the gable end in Johnston Street.

We have scoped out the project with Mark and he has produced a mock-up of an example mural, pictured above to give you an idea what one might look like. If the mural project wins the vote, we would ask the members to pick which trophy wins you want to be commemorated, and to suggest/submit any iconic images which mean most to you. Mark and the SMISA committee will agree which ones he will paint. These will include an inscription/caption and SMISA logo.

For logistical reasons and on the advice of the artist these will work best as a portrait of a relevant individual(s) (for example, winning goalscorer or captain/manager/player with trophy) rather than a team shot or large-scale scene. The murals won’t work on the outside of the stands due to the texture of the surface, but Mark advises they will work well on the flat interior walls.

2) Maintenance equipment for Ralston pitch - As you know, SMISA has invested £50,000 towards the new 4G astrograss pitch at the club’s training ground at Ralston, believed to be one of the best surfaces in Scotland. You can see the club’s head of youth Allan McManus thanking SMISA members for your contribution in this video.

Given the surface is being heavily used by the club’s first and youth teams, and that these surfaces do wear down over time, the club are keen to keep it in good condition and prolong its life.

With that in mind, they have asked if SMISA could contribute towards equipment to help maintain the surface – in the form of a mini tractor with extendable brushes. Our £3,000 would pay for the bulk of the cost, and the club would make up the rest. You can see a similar machine in action in this video.

3) None of the above - Members can also vote for neither of the above, which means the money would stay in the pot for possible use in the future.

Members have been given their link to vote by secure online ballot. Voting will run until Friday 25 January.