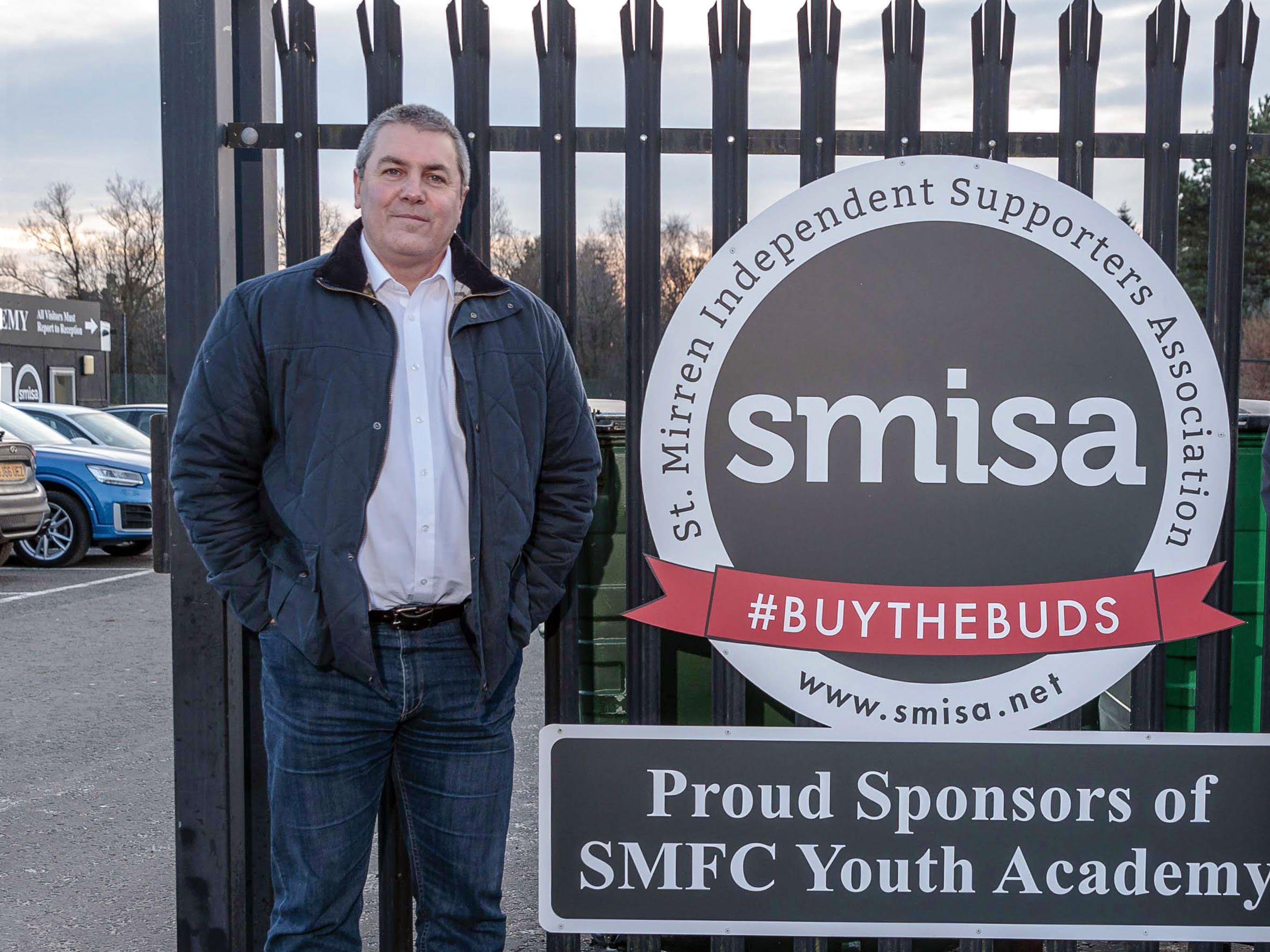 DAVID RILEY was elected on to the St Mirren club board by SMISA members towards the end of last year. Here he provides his first update to members on what that experience has been like so far.

Q: How have you found your first seven months

on the club board?

A: The first seven months have been surreal but extremely enjoyable. I still can't quite believe that I've been given the opportunity to shape the future of our club. It's not something anyone ever imagines they will have the chance to do. I've been on a very steep learning curve since December but I've had tremendous help and support from everyone at the club as I've gone around finding out how the business functions on a daily basis.

Q: What has been the one thing you’ve learned

in that time that perhaps surprised you?

A: How few people there are involved in the running of our club. I always assumed there were loads of people, each with their own area of responsibility. The company I work for has almost half a million employees so I'm used to thinking that way but we have a small team of people who do an excellent job every day, sometimes under circumstances that are not easy. My goal during the next 18 months or so is to look at how we do things and try to find ways to improve on them to make life a little easier for everyone; both staff and customers.

Q: What particular projects have you been

involved in or helped with?

A: There have been a few but the main priority for me was our ticketing system. I know many fans on different devices have had issues of one kind or another over the years and although they're not always avoidable there is certainly a lot of room for improvement. The problem is not always a system issue as such but if I'm not able to buy a ticket or renew my season ticket when I want to do it then that's a problem. I'm working directly with Interstadia and our ticket office staff to address this.

Another thing that wasn’t really a project but an unexpected task was being involved in the recruitment of our new manager. It wasn’t something I expected during my two years on the board but it was great experience as we move towards fan ownership.

Q: What’s been the most enjoyable aspect of

being a director so far?

A: I can't single out any aspect of the job, I've honestly enjoyed every minute...maybe with the exception of my dear old mum phoning me to tell me my photo was in the Paisley Daily Express and that I really need to go on a diet because they couldn't fit me on one page!

Q: As SMISA’s elected representative how important is it

to ensure the supporters are taken into consideration where possible?

A: It's my top priority. I'm a supporter first and foremost, as is everyone on the board. I'm focussing on improving the supporter experience in all dealings with the club. Without supporters we wouldn't have a club so we should never stop looking for ways to improve the relationship between the club and those who spend a lot of money supporting us.

Changes won't happen overnight and we won't get everything right first time but I am committed to making improvements in as many areas as possible during my time on the board.

There are, of course, times when what's unpopular with the supporters conflicts with what's best for the club, in a business sense; giving over the South Stand to opposing supporters being a good example of that.

That decision allowed us to bring in two players in January without whom, there is no doubt, we would be preparing for life in the Championship this season. The supporters’ opinions are not being ignored in making decisions such as this but we, on the board, have a duty to act in the best interests of the club and maintaining our place in the Premiership is where our club needs to be and deserves to be.

Q: What are the key attributes a director should

possess to be able to make a positive contribution

to the running of the club?

A: Social skills are, in my opinion, as important as any business skills you can bring to the role. On match days you host and have conversations with the opposition team's board alongside some well-respected figures from the game so good communication skills are required.

In board dealings, the ability to see both sides of an argument and take a measured approach when making decisions are critical along with good time management skills, genuine desire to get involved and a willingness to go outside your comfort zone. It's not always easy but it's always worthwhile.

Q: What do you think could be done to make the

A: Generally speaking, in any business you will find that things are done in a certain way because "that's how they've always been done". There is the wise old saying; if it ain't broke don't fix it. That's true to a point but you first have to make sure that it really ain't broke, even a little. In my day job I'm paid to optimise processes and improve efficiency across multiple departments. A big part of my job is asking questions, suggesting alternatives and trying them out.

It sounds simple and it is. That's what I have started and will continue to do at the club. It helps me get an understanding of the individual jobs and how the departments interact with each other and our customers but it also allows me to look at how everything gets done, without any preconceived ideas and potentially see opportunities to make improvements.

Should any member wish to discuss a club-related issue with David, he can be contacted on [email protected]