Members will be aware that due to the Covid-19 pandemic restrictions, we have been unable to hold SMISA's Annual General Meeting in its normal format this year, and are conducting our AGM business virtually instead. The following review of the year is a written summary of what we would have presented at the meeting, in three sections – 2019/20 Highlights, Finance and Membership, and Annual Objectives:

For much of the past year our focus was on the proposals to deliver majority fan ownership of St Mirren earlier than planned by working in partnership with Kibble.

That deal was the best part of a year in the making, with our first meeting with Kibble in April of last year. At that stage we agreed to enter into discussions and a SMISA sub-committee was formed to work with the club and Kibble to develop an idea of what any deal might look like.

By summer we had firmed up the principles of that into something we felt would work and our workload peaked over the winter as we finalised the details of the legal agreement and how to communicate the proposals to members. We put those plans to you because we believe they offer the best possible future for our club and we are delighted almost 92% of members backed them during that vote in February.

While lockdown has obviously made a big impact on club operations over the past month, we hope to be able to keep working with the club and Kibble to help deliver on the benefits of the new ownership structure over the coming year.

The focus on the Kibble deal did inevitably divert our focus from other areas. However there were a number of other key achievements, including:

- our members made several great projects possible through the £2 pot – including a tactics screen and drone for the first team and academy, funding for Paisley Panda’s pre-match children’s entertainment, support for the St Mirren Charitable Foundation’s Festive Friends Christmas meal, new strips for St Mirren Women’s team, funding some of the club’s youth teams to travel to a tournament in England, and another year of SMISA’s popular community season ticket scheme.

- we ran a well-attended and well-received meet-the-manager night which saw Jim Goodwin and Lee Sharp take questions from fans;

- we also worked with a local artists to unveil six murals celebrating previous trophy wins which have proved to be popular additions to the stadium interior;

The image below shows some of our key numbers for the year. 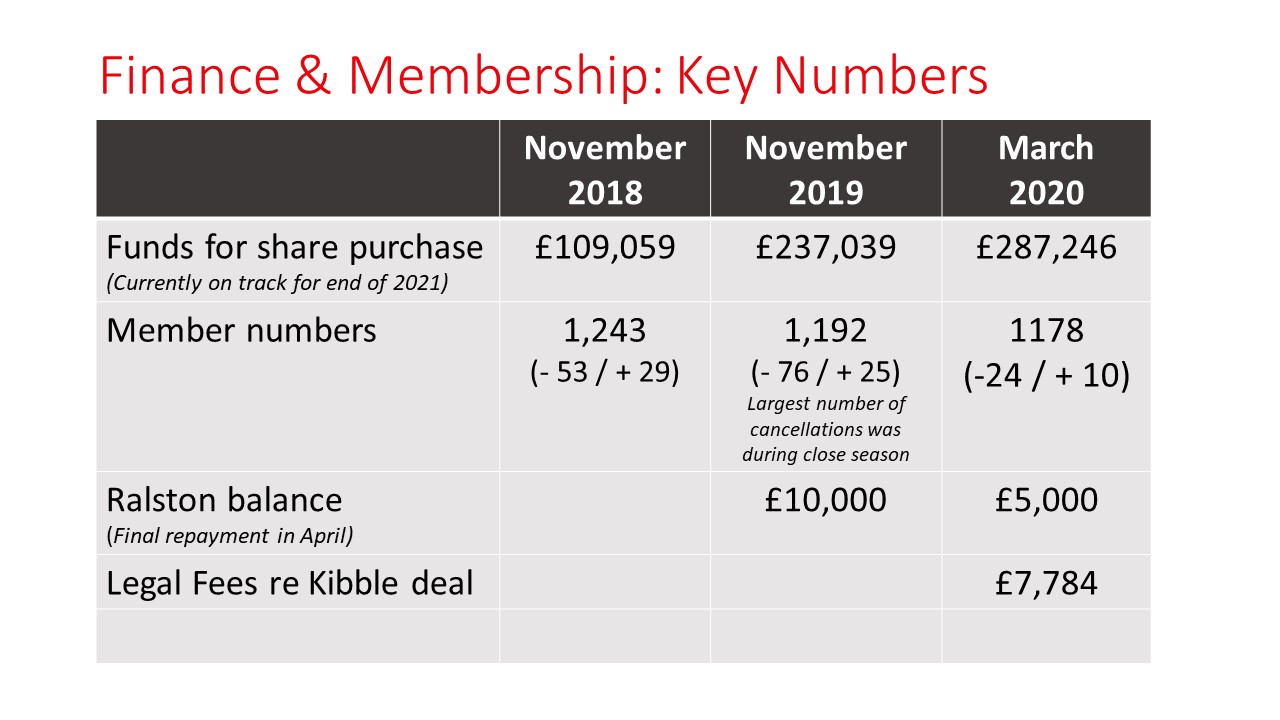 The top line shows how our share-purchase pot has grown over the past year. The Kibble deal means we now only need £331k to acquire the majority stake in the club at end 2021. We plan to also have a sizeable cash reserve (ideally, around £100,000) at that time, which we are on track to have.

But there is a new ‘known unknown’ in that we can’t predict the impact of the financial hardship caused by Covd-19 on membership numbers. We will obviously monitor that closely over the coming months and update our projections accordingly.

In terms of membership numbers, you can see the rate of leavers and joiners for the past 18 months above. While the overall trend is downwards, we have always budgeted for this, and the level of drop-off is well within our projections.

The last line shows the legal expenses incurred while negotiating the legal agreement underpinning the Kibble deal. It was essential we had proper legal advice on this. As our financial year end is November 2019, this expense will feature in next year’s accounts rather than the ones considered as part of the AGM, but we wanted to make members aware of this additional expense.

The other major update around membership is the VeryConnect membership portal is now up and running. This means all our member data, emails, events and ballots are now in one place, and using the one database. This has seen a huge reduction in the admin workload of the committee and means our behind-the-scenes operations have been significantly professionalised.

The vote on the Kibble deal saw a big increase in registrations on the platform but there still remains around 200 members who haven’t yet done so, despite the many reminders we have issued. Those members are unable to vote in ballots or book places at events. If you are one of them and need help to register, please email us at [email protected]

Each year at the AGM we report on how we have performed against our objectives for the previous year and on what objectives we have set for the year ahead. Our 2019 objectives and results were:

1. Review process for electing a SMISA member to the SMFC board – this one has been overtaken by events in that the terms of the Kibble deal have changed SMISA’s position to one where we will no longer elect a single representative but the committee will directly appoint the majority of the club board. One of our objectives for next year is to put in place a process for this.

3. Complete installation of the new online membership platform – as detailed above, we rolled out VeryConnect to members in September.

4. Develop a SMISA community strategy – this objective was refocused to concentrate on one project – helping the club reduce its carbon footprint and increase recycling. A sub-group of SMISA committee members researched and produced a detailed report for the club board with costed solutions including installing separate waste and recycling bins around the stadium. When implemented we believe St Mirren will be the first club in Scotland to do this.

Our objectives for the upcoming year are as follows:

1. Formalise the process for recruiting SMISA representatives to the SMFC board, and appoint our next representative by summer 2020 – SMISA’s future role will be to appoint people with the skills and expertise to take the club forward. To do that we need to create a job description, person spec and interview process, and consider how to attract candidates of suitable quality.

2. Continue to develop membership strategy - ongoing effort is needed to attract new members and retain existing ones. As part of that we will revisit the plans for a junior membership scheme to hopefully bring though the next generation of SMISA members.

3. Help the club to further reduce its carbon footprint – we will continue working with the club to bring in the new stadium recycling scheme, and identify other areas for improvement around minimising waste and improving energy efficiency.

4. Produce a revised structure of membership fees and benefits, to be ready when SMISA secures majority stake in the club – the Kibble deal has brough forward fan ownership by several years and means key questions about our future operation need considered sooner than expected. Key among them is what our membership fees should be, how that income will be spent, and what benefits will be available to members in return. We will review our options around all these points.