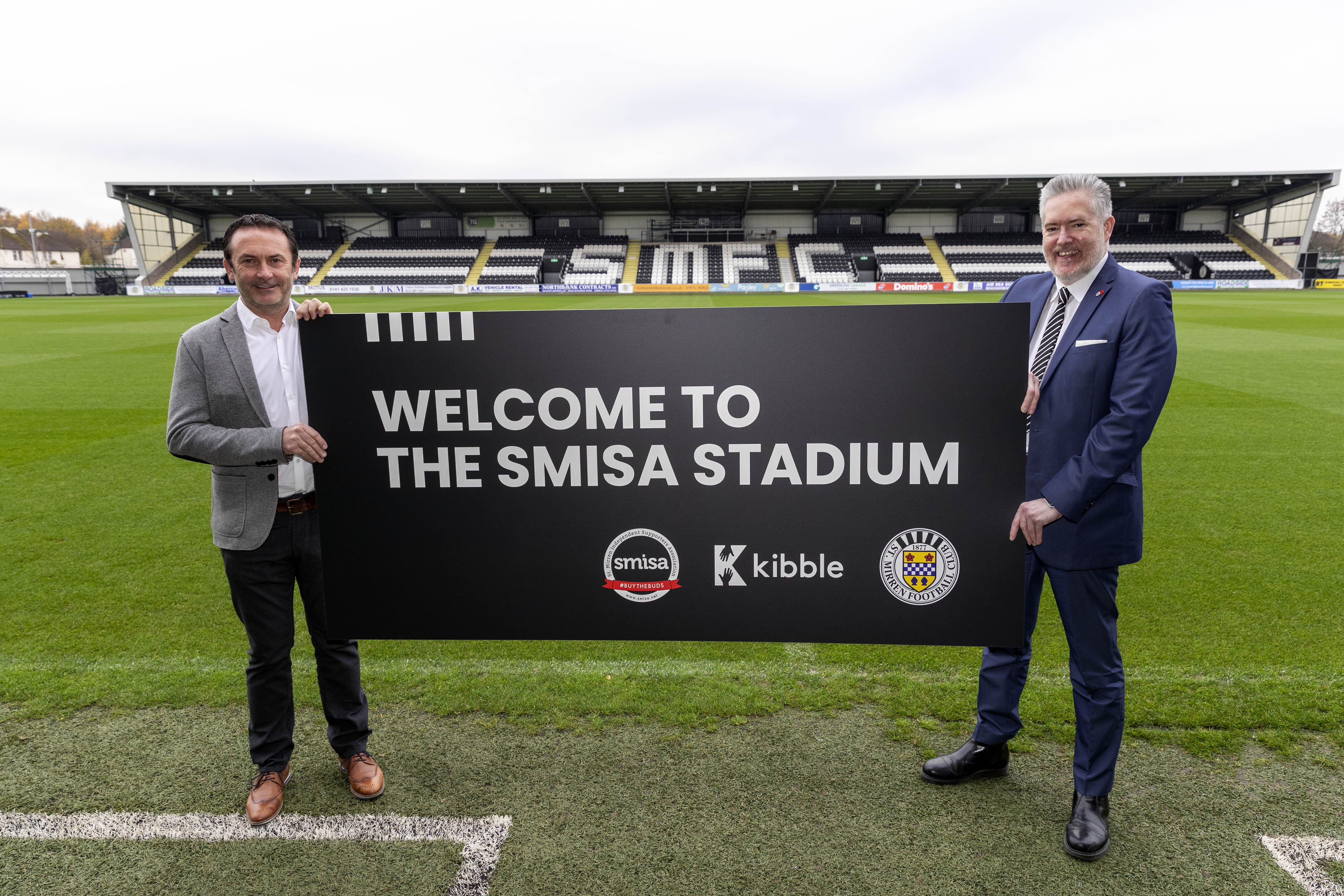 St Mirren Park to be renamed The SMISA Stadium

St Mirren’s home is being renamed The SMISA Stadium in a show of recognition of the fans as we start the final countdown to becoming majority owners of the club in the summer.

To thank the members for your continued commitment, the club board has decided to gift the naming rights to the stadium to SMISA for the rest of season 2020/21.

The gesture is designed to mark what will be the last season before the club becomes majority fan owned – as we can also today confirm we are on track to complete the share purchase in the summer.

Our legal agreement with chairman Gordon Scott currently says this will happen by the end of 2021. But thanks the commitment of our members – past and present - we will have the share purchase money and a sizeable cash reserve sooner than hoped. And Gordon has confirmed he is happy to complete the share purchase on a date to be decided in the close-season.

The club board has agreed the stadium-naming gesture to thank SMISA’s 1,150-plus members – whose monthly membership fees have been saved towards the share purchase since 2016 – for making that possible.

And it will mean that tonight’s match against Dundee United will be the first to take place in the newly-christened SMISA Stadium.

SMISA chair George Adam MSP said: “Our aim has always been the same – to see St Mirren stay forever at the heart of the Paisley community and in the hands of those who will care for it most. What better way to mark the ownership of the club moving into the hands of the fans than to put their name above the door?

“When we started off on the journey towards fan ownership five years ago we never expected to be in this position so soon – but the incredible commitment of our members made this possible. We are thrilled the club board have chosen to recognise SMISA members in this way.”

Gordon Scott added: “I always wanted to know I was handing over the ownership of the club to the fans when the time was right, and with the set-up we now have in place we believe that time will be in the summer.

“I and the rest of the board are delighted to be able to recognise the commitment of SMISA’s members over the past five years for making all of this possible.

“Sadly our fans can’t be in the stadium at the moment but we hope having SMISA’s name on the ground for the rest of the season shows how much we value them as the lifeblood and future of the club.”

The #BuyTheBuds deal had initially been expected to take ten years to complete but will be delivered in just five thanks to SMISA and St Mirren’s partnership with leading social enterprise and social care charity Kibble.

That partnership was overwhelmingly approved by SMISA’s members during a vote in February and is believed to be unique in Europe by making a charity the part-owners of a top-flight football club.

Kibble provide support services and commercial expertise to the club, while working with the club to creating job and training opportunities for the young people in their care.

Their purchase of some of Gordon’s shares reduced the sum SMISA needed to raise and means SMISA now expect by the summer to have banked the share purchase money plus a substantial cash reserve, which will help offer financial security to the club in future.

Kibble chief executive and St Mirren director Jim Gillespie added: “With Kibble having been in Paisley for the best part of 200 years, our involvement with St Mirren helps bring together two of the town’s oldest institutions.

“But with SMISA taking on the majority shareholding, St Mirren’s future will be a fan-owned one. Kibble are delighted to be supporting that and helping keep this club at heart of the community."

“SMISA’s members are the ones who made this happen and the stadium renaming is a great gesture to recognise them for their fantastic achievement.”