SMiSA Player of the Year Event 2008

After what was a disappointing result and performance in Saints final home Saturday game of the season in being held to a goalless draw against Gretna, SMiSA held its 2008 Player of the Year night this past Saturday on the 10th of May at Suburbia in Shuttle St Paisley.

The event was, as last years, well-attended by players including Hugh Murray, Ian Maxwell, David Van Zanten, Gary Mason, Will Haining, Andy Dorman, Billy Mehmet, Craig Dargo & Franco Miranda among many others, as well as the management team of Gus MacPherson & Andy Millen.

The awards given were: 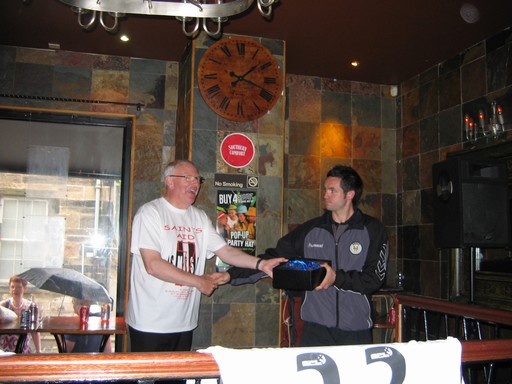 Al Mitchell was also back this year, and he performed a live set of songs including his two most popular songs in the Saints Fraternity  The Buddies Came Roaring Back and The Ballad of Billy Abercromby.  Among the others he also performed cover versions of Down Under and Oh When The Saints, which went down particularly well with those in attendance!

Following on from the presentations, SMiSA Chairman Alistair Colquhoun invited Gus again was called to the stage to have the last word.  Among other things he said these about the players at the club:

Were delighted with them, their attitude and their application towards their profession is outstanding.

We urge the supporters to stay behind us because its paramount that we have the supportthe easiest thing in the world is to criticise, weve got to make sure that these guys appreciate what theyve got because if we all believe we can go forward, we will do that and its important that we get everyone behind us.

These sentiments were echoed by the vast majority of fans in attendance and earned Gus a well-earned round of applause as he left the stage.

Following this, a raffle of numerous prizes was held.  Special thanks must go to Alan Provan and all at Provan Sports for their donation of several items of Saints Merchandise, as well as B&W Armys thepaisleypanda, who very kindly donated a signed Saints shirt.  Steven ODonnells top was also put up for raffle, as the proceeds of last years event went towards sponsoring his shirt for the season with this years event in mind.  It is hoped that the proceeds of this years event will be able to cover a players sponsorship for the same purpose next season.