The following annual report is a summary of the updates provided at the AGM of the 1877 Society Ltd (SMISA) which took place on Monday 26 April.

The AGM saw us look back over the past year and ahead to the next one, which will see us take over the majority ownership of the club in the summer. You can view a recording of the full meeting on our YouTube channel here.

The slide below shows the results of the formal business, as voted on by members in the run-up to this year’s meeting: 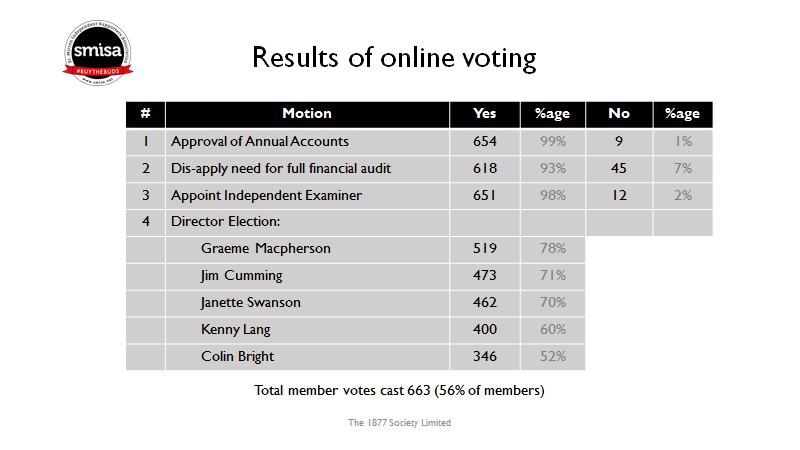 Highlights of the year

Despite a challenging year with the ongoing pandemic, we have had a successful year thanks to your continued support. Highlights include:

- the ground was renamed The SMISA Stadium for the season which helped increase our profile in the run-up to fan ownership;

- John Needham was recruited to join David Riley as one of our two representatives on the club board, replacing David Nicol;

- we hosted two well attended Meet The Manager evenings via Zoom – with members from across the world joining in;

- for the first time members voted for next season’s home and away kits, with the result to be revealed at the new kit launch in the summer.

Also, thanks to your continued support the £2 spend made possible the following projects:

- £14.8k to the club’s youth academy, to help support their ongoing work during the pandemic;

- £3.4k to SMTV to buy better equipment and a new camera to improve match-day coverage;

- £6k for much-needed maintenance and upgrades to the first-team training centre at Ralston, delivered in partnership with Kibble;

- £1.5k for a new Panda costume, for use on match days and for other club and community events.

Key points relating to finance and membership include:

- SMISA’s cash is currently spread across a number of different bank accounts to help maximise the level of interest earned, each with deposits of no more than £85,000, the FSCS guarantee limit.

- we expect to have a cash reserve left of around £140,000 once the share purchase has been completed in July;

- we believe most who have left have done so for financial reasons. While we expected the pandemic may have a negative impact on member numbers, that hasn’t happened. Since last November, 12 have left and 28 joined;

- our Very Connect membership system allows members to set their age and location. Members are spread not just throughout Scotland and the UK, but from Europe, the USA, Asia and Australia too;

- however the vast majority of our members are aged over 40, and we are looking at how we can attract more younger members in future;

Our objectives for 2020/21 – and how we performed against them, were as follows:

1) Formalise the process for recruiting SMISA representatives to the SMFC board, and appoint our next representative by summer 2020 (this was completed, with John Needham selected and appointed in August).

2) Continue to develop our membership strategy (this is still ongoing, having been disrupted by the pandemic).

3) Help the club to further reduce its carbon footprint (this was put on hold as the pandemic prevented fans from visiting the stadium, and will be looked at again once we return to normal).

4) Produce a revised structure of membership fees and benefits, to be ready when SMISA secures the majority stake in the club (this is being finalised and we will be introducing a new membership structure and benefits package very soon).

2) Work closely with our partners Kibble and demonstrate to our members how the partnership has brought benefits to the club and the wider community.

3) We would like SMISA to be more inclusive and available to more supporters.

We’ve already laid out the key points of how fan ownership will work elsewhere on the website. The single most important thing is that St Mirren continues to be a well-run business. So we would reiterate that fan-owned won’t mean fan-run.

The club’s day-to-day business will still be done by the professionals in the club’s management and staff, overseen by the club board, of which SMISA will appoint at least half. While we will demand the club board consider the views of our members and the wider fanbase, we will trust them to make business decisions they believe best for St Mirren.

SMISA role - We spent time over the past year firming up the definition of this. Based on the results of the members survey we did in summer 2020, we created a mission, vision and role for SMISA, which can be viewed here.

Beyond that a lot of work is being done around SMISA operations post-takeover:

Members fees – In future we’ll still need an income - we have running costs and we want to be able to invest in the club once we own it.

But being inclusive is now one of our values and we know cost has a been a barrier to people joining in the past. So we plan to introduce a new membership tier – at £5 per month, as well as the current £12 and £25 pm tiers.

This new benefits package is still a work in progress but we hope to reveal details soon. We are also looking into creating a junior membership category.

Future finance – we previously asked our members if they were happy for SMISA money to continue being invested in the club once the shares are bought. 89% said they were and only 2% weren’t (the rest were maybes).

We estimate after the summer SMISA will have a six-figure annual sum after costs which could be used as members see fit. We are working on a set of proposals just now over how we think that money could be best used, and hope to put that to a member vote in the coming weeks.