The following annual report is a summary based on the AGM of the 1877 Society Ltd (SMISA) which took place on Thursday April 21 at the SMISA Stadium.

The AGM saw us look back over the past year and ahead to the next one, while members also heard from St Mirren’s Head of Youth, Allan McManus, and St Mirren Charitable Foundation’s chief executive, Gayle Brannigan, about how SMISA funding has helped them. A Q&A session then followed the presentations.

The slide below shows the results of the formal business, as voted on by members in the run-up to this year’s meeting: 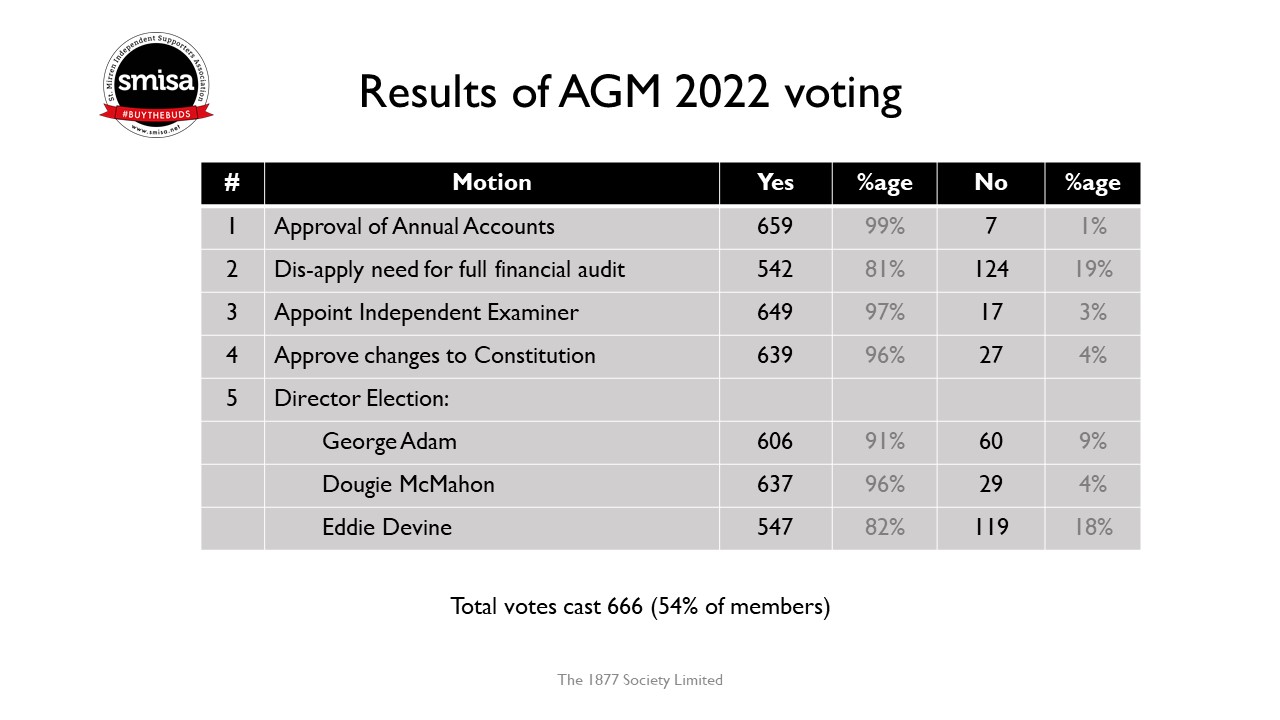 Key points relating to finance and membership include:

Highlights of the year

Our objectives for 2021/22, and how we performed against them, were as follows:

To help support our first objective for next year, SMISA director Kenny Lang will take on the role of Fan Engagement Officer to help build and strengthen relationships with the club, the SLOs and other key stakeholders in a bid to improve supporter relations and to ensure any matters that arise are dealt with in an efficient and timely fashion.

Fan-related projects that are ongoing or are in the pipeline include:

Allan McManus spoke about the growth of the academy and how SMISA’s ongoing support, through the £2 ballot initially and now through the new funding model, has been key to that, allowing the club to reach SFA elite status.

We were the first football club to appoint a well-being and protection officer who works across the academy and first team, with SMISA funding helping to pay for part of their salary.

The academy has also benefited from an additional games programme that has allowed young players to travel to play teams from Leeds United, Preston, Shrewsbury, Sunderland and Newcastle, experiences that help with their development and drive standards.

Allan believes the first-team management team will give young players plenty of opportunity and expects several of them to be a big part of the first-team squad next year.

Allan also reiterated that it’s an open-door policy at Ralston and members are always welcome to get in touch with any questions about the academy and how it operates.

Gayle Brannigan spoke about the work undertaken by the charitable foundation that is now into its fourth year after being resurrected from its dormant state in late 2018. Gayle pointed out that the bulk of their income comes from grant funding and applications which are classed as restricted funds.

SMISA’s support, though, is classed as unrestricted and the 10 percent now going direct to the foundation from SMISA has been invaluable to help the foundation grow and allow Gayle to recruit additional staff.

She explained all about the many different projects being run by the foundation that tackle different areas including physical wellbeing, poverty, employability, mental health and children’s events, with a view to expanding on that in the years ahead.

Alex White spoke on behalf of the SMISA club directors, initially thanking the members for endorsing his candidacy to join the St Mirren board at the end of last year. Alex underlined that there is no division on the board and everyone is fully aligned in trying to drive the club forward.

There has been a move to strengthen links between different sections of the club including the academy and the first team. Stephen Robinson is well on in his planning for next year and the club will support him in that process.

Alex admits there are financial challenges, some off the back of the pandemic, that the club is trying to manage as well as they can.

The board directors have all been tasked with dealing with certain areas and Alex’s responsibility lies in corporate contracts and how to push for better deals or to drive extra revenue. He expects the new COO, Keith Lasley, will bring a lot of fresh energy to the club when he starts next month.

A number of members asked about the situation with the Old Firm fans being given the Tony Fitzpatrick Stand and what the club’s stance on it will be going forward. John Needham replied that he is as unhappy about that scenario as any supporter and is currently chairing a working group who have been examining alternative ways to recoup that revenue if the decision is taken to only give Celtic and Rangers one stand in future seasons.

The working group is expected to deliver their recommendations in the coming days. John admits the club may need to take a financial hit in the short term but appreciates it has become a “toxic” matter in the eyes of many supporters and so it is about arriving at the best possible solution to a difficult problem.

Another member asked about the SMISA snap VAR poll and if the club has budgeted for its introduction midway through next season. Alan Quinn explained there had been a problem with the initial email but that the result had been sent out earlier in the day at the second time of asking. Of the 211 members who voted, 143 were for VAR and 68 against.

Alex White said St Mirren went back to challenge the original proposal from the SPFL which led to a different deal being put on the table with a sliding scale on costs. The club reluctantly supported that and now they will need to factor the cost of VAR implementation into next year’s budget.

Allan McManus was asked what the next thing would be for the academy in an ideal world. Allan said ideally it would be to have a team in the Lowland League but that needs a substantial amount of money. St Mirren has taken its time and grown gradually as there’s not a bottomless pit of money. Allan feels our academy is in the top four or five in the country.

There was also a question about whether SMISA-appointed club directors should stand for re-election every two or three years rather than staying on the board indefinitely. There was a feeling that it would give St Mirren problems under the club’s Articles of Association, while SMISA’s club director appointment policy is also not currently set up to deal with this matter. But it was acknowledged that directors being put up for re-election is commonplace in other companies so it is perhaps something that could be looked at for further down the line, although the process would need to be carefully managed.