SMiSA held its AGM for 2015 last weekend after a year of progress for the trust.

A healthy turnout of around 50 members gathered in the hospitality suite at St Mirren Park to hear about the ups and downs of the past 12 months, and to consider how the turst can continue to support the club in future.

Secretary John White chaired the meeting and opened with a vote where the trust’s accounts for 2014 were approved and John Blair was retained as independent auditor.

The meeting then considered progress against targets set at the start of 2014 in terms of membership and share ownership.

Membership was given as 175, falling short of what John admitted was a very ambitious target of 350, but still representing a big increase on the Jan 2014 total of 65.

The trust now owns 6,042 shares in the club (around 3% of the total), having made a number of purchases from individual shareholders in the past year and thus exceeding the target of 6,000.

Next up was a look at some of the negative outcomes and areas for improvement in the past 12 months.

Top of the list was a shares bid proposal – the trust had in early 2014 produced a paper looking into a buyout of the consortium’s 52% shareholding.

The committee at the time met with various people to gauge support and said Stewart Gilmour was very much open to discussion.

But it was felt that individuals with the willingness and capability to provide the levels of finance required weren’t there.

The committee also felt the project would have been a full-time job for several people and the resource just wasn’t there to make it happen.

John explained his reason for going public on this now was he was aware the club’s ownership remains a hot topic and he wanted the membership to be aware a trust-led buyout had been looked into, but wasn’t feasible at this stage.

Other negatives covered included the loss of a couple of long-serving members from the committee in Alastair Colqhoun and Dave Tennant, and the limited number of trust events.

But in terms of positive outcomes, there were a few points to be covered. Top of the list was the SMiSA Panda Club which the trust had subsidised for the season to the tune of £2,500.

That had allowed the club to cut the price for the Panda club – which provides football coaching and match entry to young fans aged five to 12 – from £5 to £2.

Committee member Tony Dorris explained the Panda club was now averaging around 60 kids a game compared to 40 before, and was bringing in kids in who hadn’t been St Mirren fans before.

John also touched on the loan of £50,000 from the trust for the Airdome behind the away stand, which had allowed the club to increase its community activity and the status of its youth academy.

Other positive developments included an increased number of committee members, and regular meetings between members of the trust committee and Brian Caldwell at the club.

John then invited a wider discussion on what the trust’s objectives should be for the next year.

It was suggested that the drive to increase the membership further could be aided by asking the club to include an option to the join the trust on season ticket renewal forms.

This led to a wider discussion about the general direction of the club under the current board, during which some strong views were expressed. It was felt the club was being allowed to drift towards relegation and some members suggested the board appeared to be doing little about it.

Fan ownership was mentioned again, allowing new committee member and local MSP George Adam to update the meeting on the Community Empowerment Bill currently going through the Scottish Parliament, which contains an amendment whereby supporters’ trusts get first option to buy their club should they go up for sale.

John closed the AGM by thanking everyone for attending and saying: “Everybody should be proud of what we have achieved as in 2014 as we have come a long way. We were off track for a few years but now we are very much back on track.”

General SMiSA News 31 March 2015
Calling all SMISA members and Saints fans! This Saturday (4 April) is the trust's AGM, and it is crucial we get a good turnout from members on the day as a number of important bits of business will be discussed. The AGM will be in the hospitality suite at St Mirren Park from 11am and non-members are also welcome to attend.
The Supporters Trust takes on more importance in difficult times and there is no question that is where the club is just now. As it stands there are giant question marks hanging over the future ownership and direction of our club. Whether we continue under the current board or find ourselves sold to new owners, the fans need a strong voice to represent them.
SMISA has built some real momentum of late and we are optimistic of increasing our influence in the near future. We have more than doubled our membership in the past six months and increased our shareholding in the club - and expect to continue growing in numbers and strength in the year ahead.
At the AGM we will be formally electing the trust's committee - over the past year the long-serving core has been joined by a number of new committee members, and all involved will be up for formal election on Saturday. So this is your chance to help choose and meet the people who will be running the trust (and it is your trust) and put any questions you may have to them.
We will be looking back at our activities in the past year in terms of membership and share purchases, as well as sponsorship and fundraising for youth development. We will also be looking ahead and inviting members to help us shape our priorities for future activity.
We expect the AGM will last around an hour or so, so please come on down. We would have liked to have held the AGM on the same day as a home game but sadly this wasn't possible due to fixture scheduling.

General SMiSA News 11 December 2014
Thank you to Alan Rew , owner of the Court Bar St James Street Paisley who have are the latest local business to join SMISA.  Please drop in and say hello to Alan and his staff whenever you are passing and support this local business.   Alan is a long-standing St Mirren fan who follows  the team home and away. 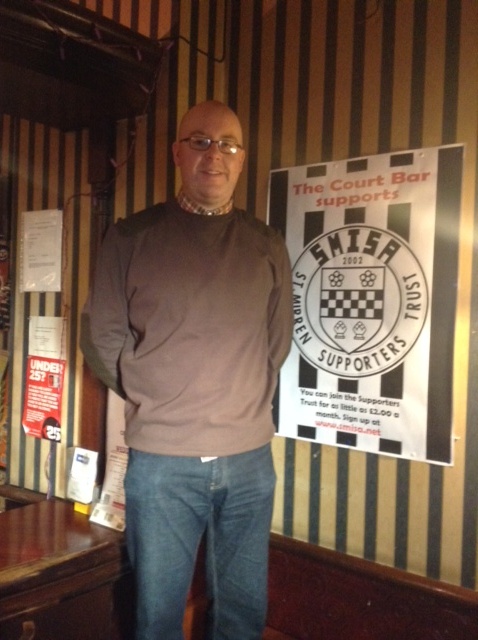 When SMISA, The St.Mirren Supporters Trust was set up, one of its main objectives was to establish a shareholding in St. Mirren F.C Ltd to create a valid voice for the fans in the running of the club. For the purpose of purchasing shares members subscribed £10 per month.

Trusts have been particularly effective at other clubs which have embraced the involvement of fans in the board room. Dundee United for example have a full director and an associate director who have been appointed through the Arab Trust.

Regrettably, this is not the case at Saints and while in its early years SMISA was able to purchase 3877 shares from the club funded by its members subscriptions, in recent years, the club have refused numerous requests from SMISA to buy more shares. As a result SMISA had to stop accepting funds from its members for share purchase and subscriptions were reduced to £2 per month. By that time, SMISA had accumulated £50K in cash and the SMISA Board decided to use its cash to purchase shares from private shareholders. This was done with extreme reluctance as obviously the money would go to individuals rather than the club.

The first wave of share purchases has been successfully completed and SMISA now owns in excess of 5000 shares. Wave 2 is now under way and the SMISA Board is very optimistic that a further substantial increase in our shareholding will be achieved soon.

If you are a shareholder interested in selling your shares, please contact us. The constitution of the trust does not allow SMISA to sell shares so you can be assured that your shares will be held in perpetuity by a trust of Saints fans with a democratically elected board.

Meantime with the current long running uncertainty over the future ownership of our club, it has never been more important to have a strong representative trust. Our ranks are growing but please don't leave it to others. Join us now and add your opinions and your voice as a Saints Fan. 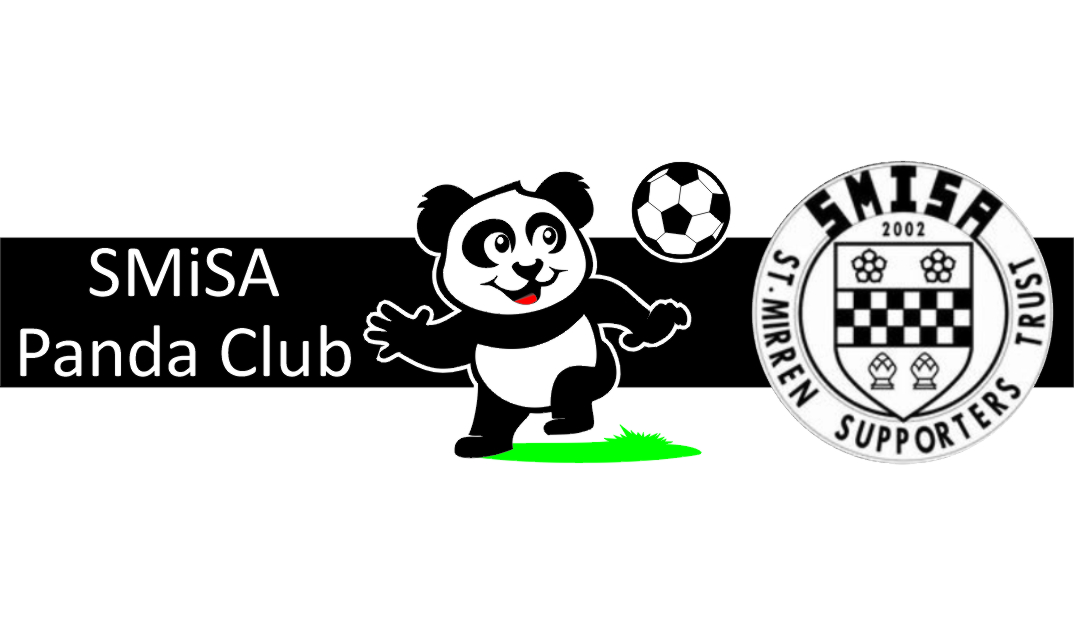 SMiSA ,the Supporters Trust , working closely with St Mirren in the Community and St Mirren Football Club are pleased to announce the successful  Panda Club is to be renamed the SMiSA Panda Club and that this joint initiative will mean that the entry fee will now be reduced to £2 per game instead of the previous £5 per game , starting with the home game against Patrick Thistle on 8th November 2014.

General SMiSA News 20 October 2014
SMiSA are seeking a Media Officer to work along side the current committee. The Supporters Trust urgently need a volunteer to co-ordinate our website and social media operations.
It's a tremendous opportunity for someone maybe seeking a career in IT / Computing, to gain valuable experience.
If you think you can help or know someone please contact us through this page or email [email protected]

Calling all the St Mirren fans

General SMiSA News 20 October 2014
Calling all St Mirren fans...your Supporters' Trust Needs You!
As the potential club sale drags on and on, big question marks remain over the future direction of St Mirren FC.
That's why it has never been more important for there to be a strong voice to represent you, the fans, to any current or future owner of the club.
SMISA is already the largest grouping of St Mirren fans but we need more members to realise our ultimate aim of meaningful supporter involvement in the running of the club.
You could sign up to be a member of the trust for just £2 per month. Want to know more about the benefits?
Click here to join

General SMiSA News 20 October 2014
On Saturday 15 November The Youth Academy are holding their Annual Fundraising Dinner. It's always a great night and SMiSA would like to urge as many St Mirren fans to get along as possible.
Here is a link to all the details you need Click here