Having a Ball with Youth Development

General SMiSA News 09 September 2014
SMiSA have just donated £1195 to Youth Development at the football club, we were invited down to Ralston last week to meet some of the guys. This can only be done with the continued support of the St Mirren fans.You can join the trust for only £2 per month.  Click here 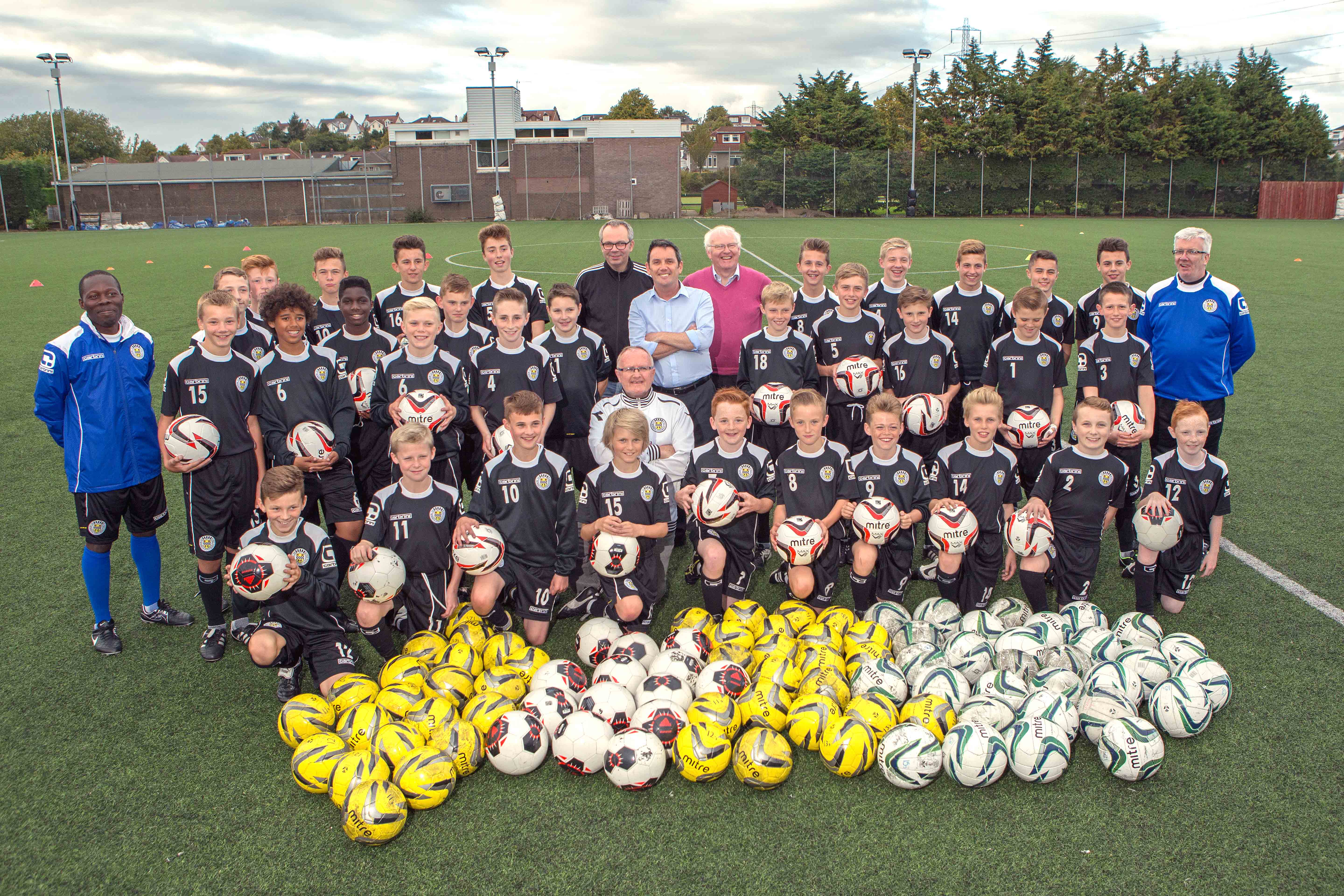 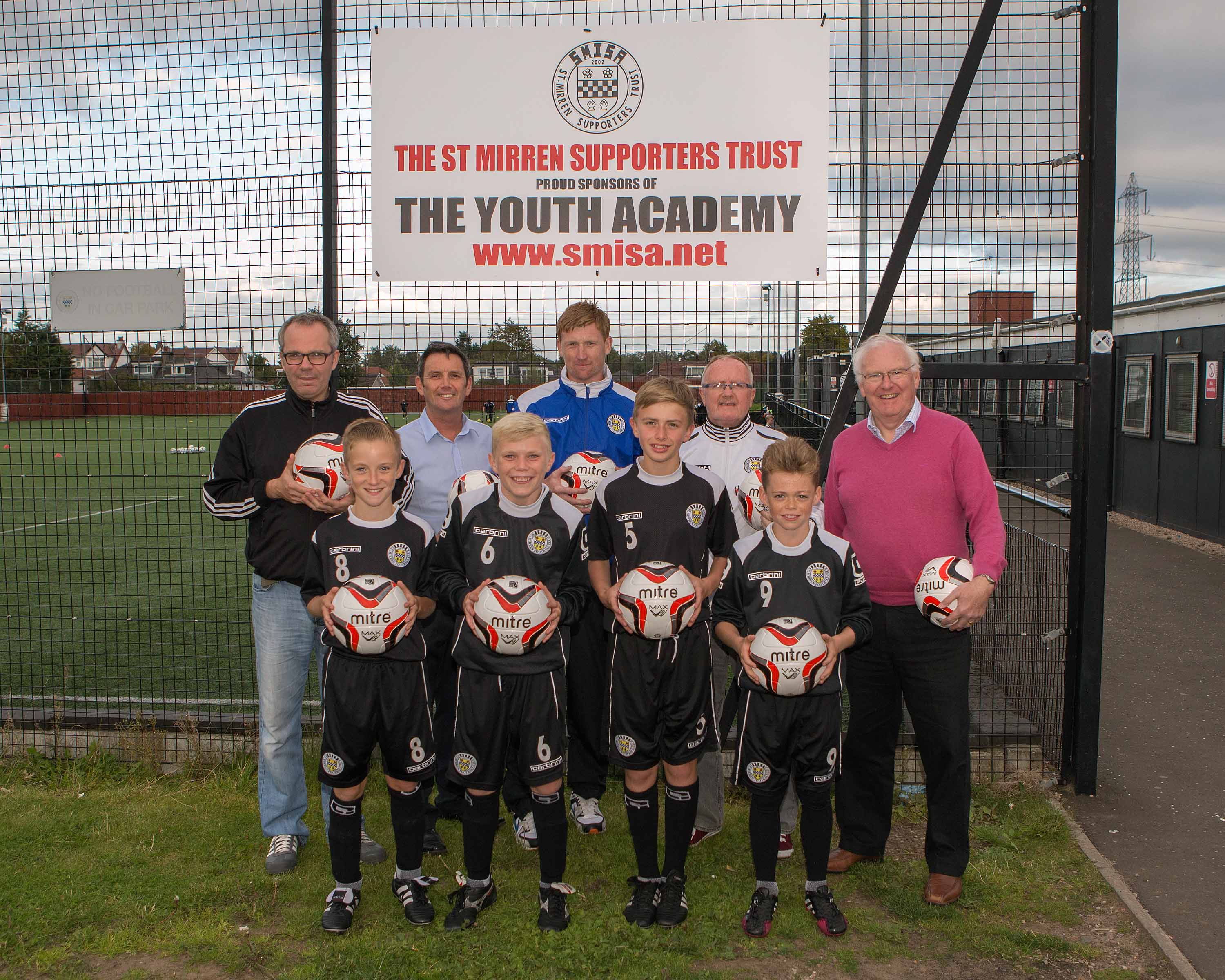 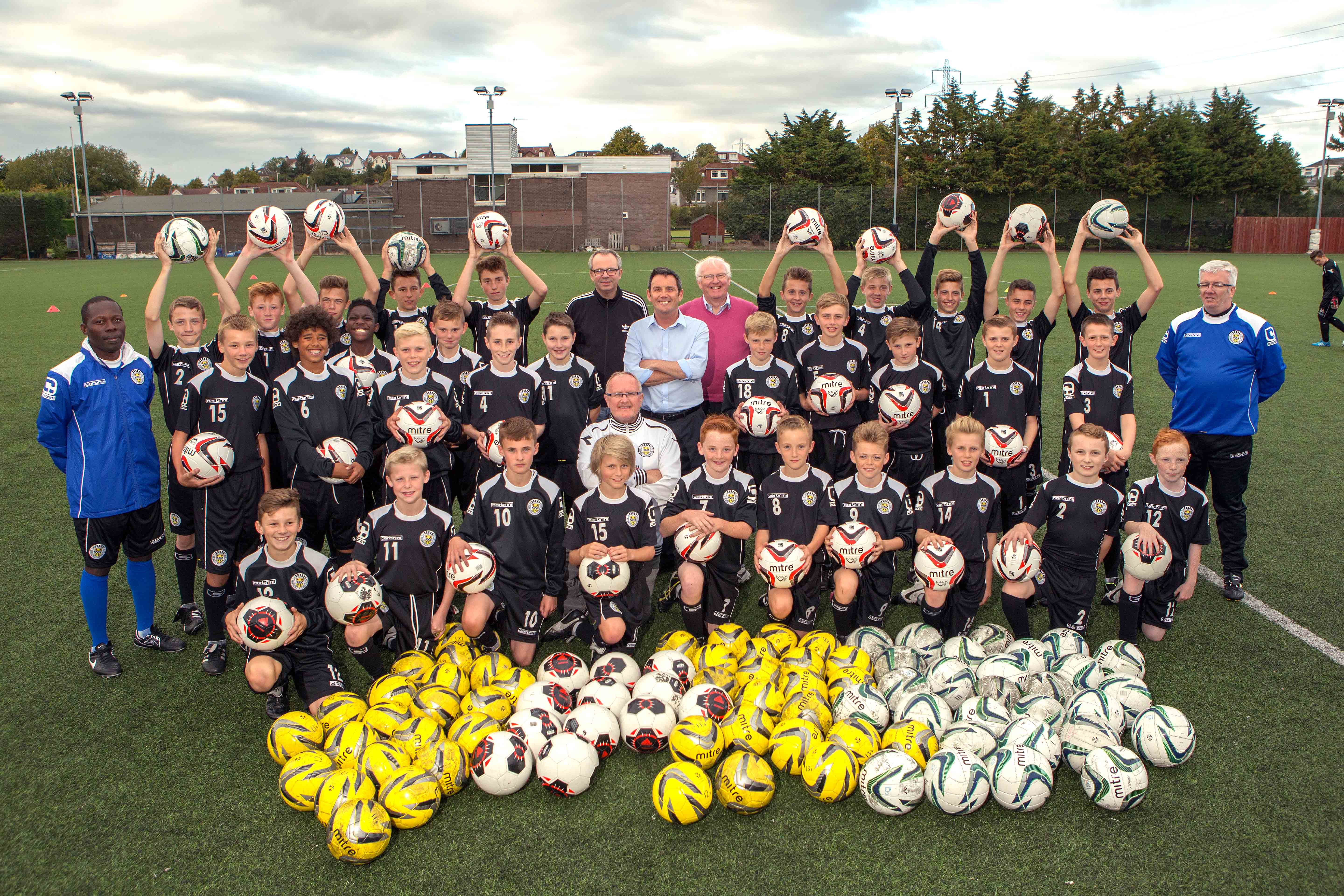 General SMiSA News 27 August 2014
Membership and Business Appeal
Since the start of 2014, membership of SMiSA, the St.Mirren Supporters Trust, has been increasing at the rate of approximately 5 to 6 people per month. This increase, along with the members who have been in the Trust for several years is allowing us to become more active in our various aims and initiatives, such as recently becoming the main sponsor of St.Mirren Youth Development Academy, the only five star rated set-up in Scotland.
We aim to continue to grow our membership and therefore our development and our projects because the more the Supporters Trust membership increases the more we are able to represent and provide for the supporters and for St.Mirren.
Therefore we are appealing to all our current members to encourage their friends and relatives to also sign up and join the Supporters Trust and maintain the impetus and outcomes of this years' recruitment drive.
As well as individual supporters becoming members we also want to encourage businesses, or rather the business owners to become members of SMiSA. As a business partner there are no special increased fees or expectations and all that any business would do is to become a member of SMiSA at the minimum normal rate of £2 per month and display a small poster on their premises acknowledging their association with The Supporters Trust, and likewise SMiSA will promote the business permanently on our website and include a direct link to the their website, as well as on events or promotion literature.
Although this concept is a recent initiative the principle is also available to any current members who may wish to promote their own business and SMiSA, through mutual advertising and promotion.
This sign up can be undertaken directly through our website or by contacting us using any of the means of email [email protected] or by call or text on 07596 165 194
Thank you for your continued support and active involvement with the Supporters Trust 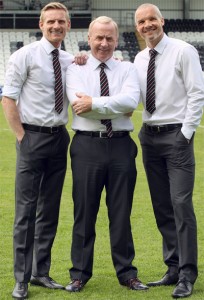 Thursday 4 September is when you will have the opportunity to meet and discuss the clubs plans for the season ahead with the new management team for the first time at a Q & A evening at the stadium with kick off at 7:00 pm.

The success of the previous and well attended events has ensured this one, shortly after the transfer window closes, will allow every St.Mirren supporter to put forward their questions and comments to manager Tommy Craig and his first team coaches Jim Goodwin and Gary Teale as we venture into the new season.
This is a real opportunity not afforded at other clubs, for you to engage with the people at the sharp end of our club, therefore we strongly recommend you don't miss out on what will surely be an informative and enjoyable evening.
As with all SMiSA events the ethos is one of inclusion and affordability for all, therefore there will be no entry fee with only a bucket (fortunately without a big hole in it) where if you choose you can make a donation which will go directly to the clubs increasingly successful Youth Development Academy at Ralston
See you there

General SMiSA News 24 July 2014
Well done to SMiSA members Michael Connolly & Greig Martin whose names have been drawn out and are the lucky winners of the strips we sponsored in the programme  last season . The strips we sponsored last season were Darren McGregor's home and Jim Goodwin's away.
We will of course be doing the same this season, so for a chance to win this season's tops get join us now CLICKY

General SMiSA News 17 July 2014
If you are heading down to Ralston this evening for the Renfrewshire Cup Semi Final keep an eye for our new banner we have displayed proudly.
SMiSA cannot operate without our members and the more we have the stronger we are and teh more money we can channel towards Youth Development. This sign follows on fom the other one that went up last week at the Airdome. Click Here
We now have our signs up, it's now up to the St Mirren fans to sign up please do it today. Click here

SMiSA Banner up at The Dome 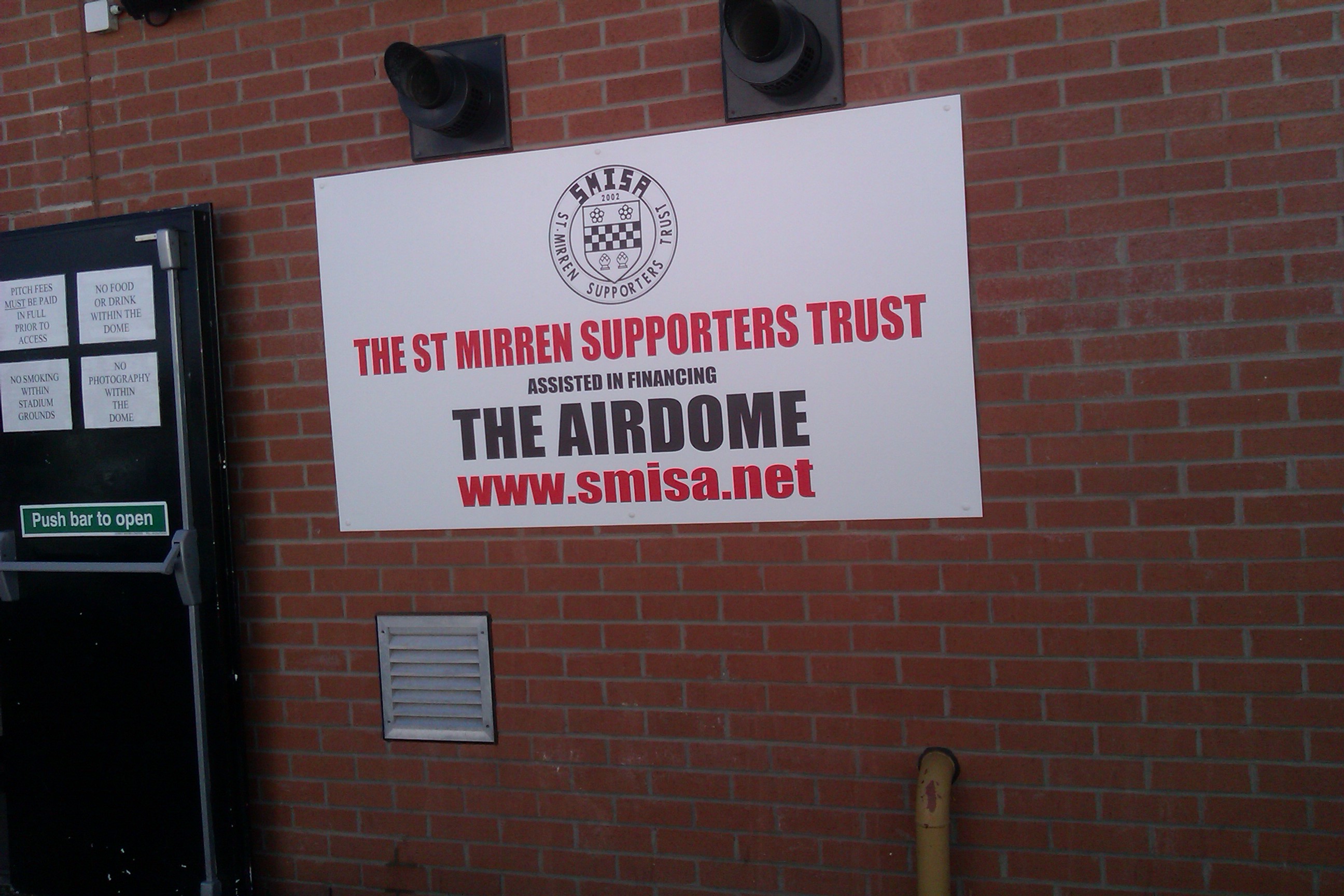 Doesn't our Banner at the Dome look great ? You can help your Supporters Trust help fund Youth Development for only £2.00 a month. Please do it today.
http://www.smisa.net/join-the-trust

General SMiSA News 07 July 2014
SMiSA had a very productive meeting last night with David Longwell from St Mirren Youth Development. it was most worthwhile for both sides and we are looking forward to some exciting ventures throughout the new season.

A Letter From the Trust Secretary, John White

For two or so years now SMiSA, The St.Mirren Supporters Trust, has been on the face of it relatively quiet and has not been in a position to pursue its aims and purpose as vigorously as we would all have liked. Although situations out with our control such as the inability to purchase unissued shares in St.Mirren thus restricting our investment in the club and the focus of all connected with the club on the unsuccessful bid for community ownership, SMiSA has still continued with ongoing Youth Development sponsorship, organised various events for the fans and general financial support for the club, such as providing the bulk of the funding for the dome.

Having since reorganised the committee and with the willingness of some individual members to get involved has provided us with a new impetus to get our targets back on track.

The changing face of football finances and the seemingly out of control ownership issues of football clubs generally provided the realisation that sitting on a large sum of money that was going nowhere coupled with the needs or the desire of the consortium to sell their majority shareholding to a single owner would diminish our long held belief of any independent supporter representation on the board of St.Mirren, where ultimately the potential future of our club could end up in the hands of any individual who may have no concern or moral obligation to St.Mirren, it’s fans or the community it represents, but perhaps they may only be interested in the club as a personal trophy or even just the value of the assets of the club !

You may consider this unlikely based on the current circumstances at St.Mirren but some fans of other Scottish clubs also thought the same when their clubs handed over the majority shareholding to seemingly credible individuals such as Brooks Mileson, Craig Whyte, Angelo Massone, or Vladimir Romanov.

It is becoming more prevalent for the stability and long term future of clubs for the decision makers and the custodians of the club to be made up of people who have a lifelong affiliation with it.

To ensure St.Mirren remains in the hands of its supporters for the next 137 years as it has done for the past 137, it needs the fans of today to be willing to contribute to the development of the club and be a part of a consolidated voice of the vast majority and for the club to grow and thrive from that base of enthusiasm and involvement.

The St.Mirren Supporters Trust intend for this group representation to be realised in a number of ways……

For as little as £2 per month you will be playing your part in helping to ensure all fans have a strong collective representation in St.Mirren, allow ongoing sponsorship and positive results of the Youth Development facility at Ralston and ensure the continuation of supporter related events.

Our website has recently been upgraded, where you can now sign up on line or if you prefer you can contact us by any of the following means below

SMiSA, The St.Mirren Supporters Trust is a registered I.P.S. which includes legal and binding rules such as one person one vote.